The Trekker Group was called on for repair work on the SeaWorld Florida Wild Arctic Dome recently. The company’s innovation and solution snagged it two 2020 Scaffold & Access Industry (SAIA) awrds.

In 2019, SeaWorld Florida needed to provide workers access to the top of the dome in its Wild Arctic exhibit for repairs to damaged sections and maintenance. The scope of the project required standards supported scaffolding. The SeaWorld staff, however, was concerned with the timing and budget. The 300,000-gallon pool would require two days to drain and three days to fill, at a cost of $75 per gallon, or $22.5 million, just to deal with the water, before even getting to the repair work. Trekker Group offered the solution of building the scaffold in the pool with the water in it. The company has two dive masters on staff who had trained the erectors to work as divers. This solution offered an incredible savings and only five days of work time to erect and dismantle the scaffolding. SeaWorld reviewed the dive plan and safety plan and accepted the proposal 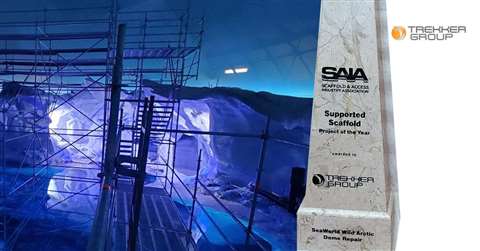 The project offered several safety concerns that has to be addressed. The floor of the pool is designed to resemble an arctic rock sea bottom with a wrecked sunken ship on the floor. The scaffold design had to take these factors into account for stability and structural integrity.

Due to the frigid temperatures, hypothermia was a serious concern for the erector/divers. At temperatures of 50 to 60 degrees Fahrenheit with no protective clothing, loss of dexterity can occur in 10 to 15 minutes, exhaustion or unconsciousness at two to seven hours, and death in one to six hours. To overcome this, the team not only used 7mm wetsuits but also put several safety procedures in place.

The crew consisted of 10 people. Two were assigned to ground duty only and would not enter the water. One rescue diver was assigned to be in the water with the other divers. The six erector/divers worked in the water no longer than 45 minutes at a time and would come out of the water and sit in front of heaters for 15 minutes. Additionally, an extra set of dive equipment, including a tank, buoyancy control device (B.C.D.), and regulator, was sunk to the bottom of the pool in case of equipment malfunction or other underwater emergency in which a diver may run out of air and not be able to surface in time.

Additional training was implemented for the erector/divers prior to the commencement of the project to overcome other obstacles. One of those was the weight of the material. A diver must maintain neutral buoyancy when working in the water. Divers use a B.C.D., which is an inflatable vest, in combination with weights to accomplish this. Once the diver is handed a piece of scaffold material, i.e., a 32-pound vertical, that balance changes immediately. The diver must be able to overcome that weight change and be able to handle the material under water. This is something that divers do not normally experience. And the handling of material for an erector completely changes from what it feels like on land. It becomes heavier and harder to move because of the resistance of the water. Thus, the erector/diver must learn where to hold the material and how to maneuver it all over again.

The material was an issue that had to be addressed as well. Because this pool is in the location for Arctic Ocean animals, the water has an extremely high salt content. There were two main concerns. The first was for the safety of the animals. All the material placed into the pool had to be new material so that it had no debris on it that could possibly contaminate the pool and endanger the animals. It also has to be completely washed with a bleach solution to ensure there was no chemical residue on it that would be dangerous for the health of the animals. Because of the high salt content, corrosion of the material after the project was completed was a concern as well. Upon completion of the project, all the material was washed down and Salt-Away was applied to it.