Supporting the space program… one scaffold leg at a time

Wallops Island, a 6-square-mile island along the coast of Virginia, is home to the NASA Wallops Flight Facility, which, according to its website, provides flight and launch services for both government and commercial sectors “from the Earth’s surface to the moon and beyond.” The facility also supports satellite tracking and commanding, military operations and training, scientific investigations and technology development and testing. Among the many agencies and organizations that are on site at the facility is the Surface Combat Systems Center (SCSC.)

The SCSC installation, often referred to as the “Battle Group in the Sand” because of its capabilities to connect U.S. Navy ships, aircrafts and land-based sites in the mid-Atlantic region, supports engineering, testing and training for combat systems in a maritime environment. The flight facility’s 165-foot-tall communications tower, essential to SCSC’S operations, was deteriorating and needed significant repairs and refurbishment. 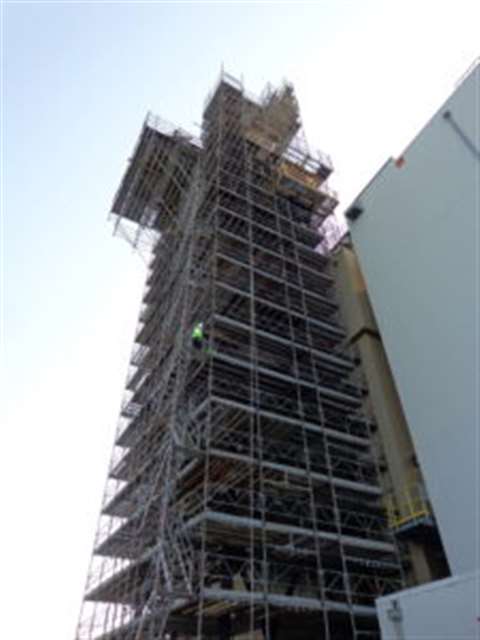 Turner Strategic Technologies, the general contractor for the project, selected Scaffolding Solutions, LLC to provide safe worker access to the entire base tower, including the exterior of the elevator, mast and antenna platforms. The scaffolding needed to be completed and ready to use before July 6, 2021.

The project is governed by the Army Corps of Engineers, EM-385 Construction Health and Safety Regulations, considered by many to be one of the tightest and toughest performance standards in the industry. The flight facility, like others governed by these regulations, restricts worker-access to U.S. citizens, with clean background checks necessary for access badging.

Scaffold Solutions routinely works at military installations, U.S. Navy ship-yards, and various government facilities, in addition to extensive commercial projects, and is familiar with both the EM-385 regulations and working in restricted-access areas. This environment is challenging in and of itself, but the project scops and timeline made it even more so.

The scaffold is roughly 165 feet tall by 40 feet long and 26 feet wide, with 25 working deck levels. Worker access is provided by using a combination of a stair tower from the ground up to the 85-foot level and StepUp OCTO scaffolding-system internal ladder decks from the roof up to the top of the communications stub mast, 165 feet off the ground

Anchoring the scaffold to the base tower and mast had to be precise to avoid causing any excess lateral load on the deteriorating structures. With the platforms on the mast being replaced, the team was unable to place any scaffold legs on the platforms themselves. Additionally, NASA restricted any ties to the antenna platforms or the adjacent building façade for support of this scaffold structure. The team overcame this challenge by installing the scaffold system’s 5-meter lattice beams which spanned across the antenna platforms and connected directly to distributed scaffold legs, providing the necessary engineered bracing.

An octagonal antenna platform 20 feet in diameter hangs off the front of the main antenna mast, and workers need to access its underside for repairs. The Scaffolding Solutions team decided to install a double cantilevered section, approximately 12 feet wide by 24 feet long, on the front side of the scaffold to provide worker access.

“The inclusion of the cantilevered section was particularly challenging, because unlike a typical scaffold, which is supported from below, the erectors had no working platform below them,” said Mike Kroupa, area manager for Scaffolding Solutions.

Kroupa said, “Such work can be mentally challenging for leading edge erectors, so good training and experience is essential to safely build cantilevered sections like this.”

An additional and critical part of the project scope was for ironworkers to remove, refurbish and reinstall the whole top section of the 165-foot antenna, the 28-foot-tall stub mast. This portion of the scaffold had to be self-supporting during the time the stub mast was gone. The system scaffolding proved to be the answer and has completely self-supporting through many weather-related events, including tropical storm Elsa with 50-mph sustained winds.

“The wedge and saddle connector joints get tighter with use, not looser, providing users a much more stable and safer structure, especially on the coast with routinely high winds, said Roger Jetton, president of Scaffolding Solutions. “Elsa’s high winds were certainly a validating test of the scaffolding system’s locking connections, as well as the carefully engineered system design and proper installation by our skilled crews.”

The Scaffolding Solutions crew of some 15 workers had two weeks to erect the base tower scaffold and three weeks to get the mast access completed. Putting even more pressure on the team, a June 15th rocket launch caused them to lose a half-day of work, as all non-essential personnel were barred from the island.

Nevertheless, the crew beat their deadlines by several days. They worked six 10-hour days a week and utilized a 60-foot-reach forklift to assist in getting the scaffold materials to the higher levels. According to Jetton, the innovation system scaffolding helped them to meet the project’s tight deadlines. He noted that the system uses 50 percent fewer pieces than traditional system scaffolding, which made the work go by more quickly.

The scaffolding installation was completed incident-free, was designed to be compliant with the Army Corp EM-385 regulations and remains structurally sound despite the persistent high winds of the coastal location. The work by the general contractor and sub-contractors is underway, and the scaffold was up until late October.