Superior Scaffold recently played a pivotal role in aiding in the construction of a 47-story condominium building in Philadelphia. The company was asked to design a monorail system that would hoist giant glass pieces to be used for the outside of the building. 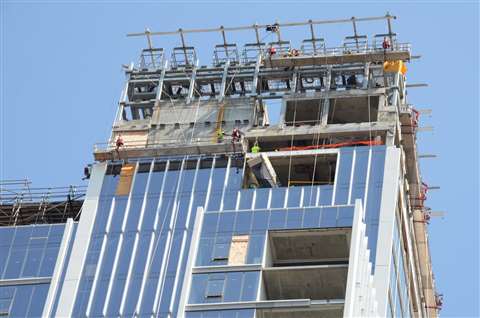 The monorail system can be seen at the top of the building.

Superior’s vice president Bob Sarkisian designed the monorail system which called for everything to be anchored to concrete – while not using counter weights.

“There was no room for counterweights and the risk of having any type of incident was too great,” the company said.

Sarkisian knew that swing manufacturer Bee Access had a robust enough concrete anchor system to allow the rigs to hold all of the weight at 47 stories high. The hoist was designed to slide along the monorail and position above the window where a cable would be lowered and hooked to the giant piece of glass. The glass would then be hoisted out of the window and then maneuvered into place where crews, riding in suspended scaffold rigs would install it.

Erik Highland, marketing director of Superior Scaffold, said that the biggest challenge was “working around everyone and everything up there on the roof. You can see from the photos all of the mechanicals where being installed at the same time, so space was tight. There were crews also installing the exterior railing and facade as well. We also had to tie off our suspended scaffold rigs to existing concrete and steel making for a maze of wire up top.”

This system required equipment that would allow the monorail to mount onto their aluminum beams. It would simultaneously have to allow the 2,000-pound hoist to move safely around the monorail system while holding hundreds of pounds of the glass pieces below.

Suspended scaffold rigs had to be positioned in and under system scaffold towers so they could move up and down to mount the glass. Swings were moved to accommodate the installation crews.

Highland said that a suspended scaffold was chosen over cranes or window manipulator machines because of the height of the building and the cost to deliver the glass to their final location.

The monorail system was built two sides of the building at a time. Once one side was done, it was moved to the next side. The $235 million Dranoff Properties project was spearheaded by GMI Contractors.