Positive signs for the shoring sector

The Scaffold & Access Industry Association’s Shoring Council is gearing up for a busy year ahead. Lindsey Anderson reports.

“The shoring industry in the U.S. has always been a rewarding, profitable and growing sector,” says Mitch Meadows, co-chair of the Scaffold & Access Industry Association’s Shoring Council. “The current market around the U.S. seems to be picking up and I anticipate there will be more opportunities than the previous two years.” 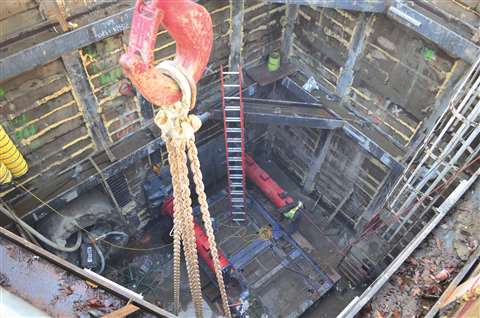 With an active industry ahead, Meadows, who also is a branch manager for D.H. Charles Engineering, Inc., says the Council is poised for a busy year.

The Shoring Council has been working on the development of a general shoring design guide for the industry, as well as fall protection guidelines for shoring projects.

“Our current goal is to focus the topics from the design guide and have the volunteer committees dive deeper into each topic to outline useful information,” Meadows says. “We are hoping to receive support from a broader group of SAIA members in the industry.”

Work for the guide began at Committee Week 2019 when the Council began to develop a general table of contents. More recently, the focus has been on bringing together volunteers to establish individual shoring topics to create standards for the industry.

“Overall, this is a very large project and encompasses a large percentage of work in the scaffold and access industry, which could greatly impact all those who work with scaffold equipment, thus highlighting the primary purpose for choosing the topic,” Meadows notes. “A rough conceptual draft has been developed, but input from the industry is still needed. Each item in the design guide will take several iterations and is anticipated to be a work in progress for several years.”

The Council is also leaning on the upcoming SAIA Committee Week to not only gather additional input from those currently involved in the volunteer committees, but to pique the interest of others to provide their thoughts and ideas. Meadows and fellow Co-Chair Ron Camp of Atlas Sales Co. are also keen to discuss best practices and related topics to pique the interest of others.

In order to keep on schedule and provide the industry with the most relevant and pertinent information, the Council would like to see additional members and roles developed within the Shoring Council, Meadows says, to “help accomplish the tasks and goals outlined. This would all be dependent on the support received.”

The Shoring Council met on May 3 at 10 a.m. during Committee Week (May 1-5 at the Peabody Hotel in Memphis.) The agenda included council updates regarding fall safety and related installation/removal requirements and the shoring design guide – prioritizing topics and a call for volunteers to source demographics data.

After being heavily damaged by a windstorm in 2018, the historic Admiralty Apartments were in desprate need of structural reinforcement and repair. 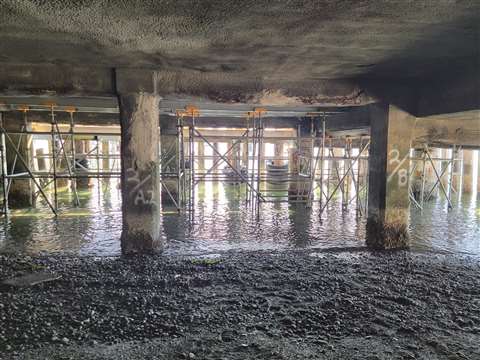 A view from underneath the Admiralty Apartments structure. (Photo: D.H . Charles Engineering)

Originally constructed in 1874, the building in Port Townsend, WA has seen its fair share of renovation and updates. But the massive windstorm which swept through the area meant that the waterfront housing development was heavily damaged.

The three-story apartment building was initially constructed with timber and a brick exterior – all resting on top of concrete piers located directly on the beach of the Puget Sound.

Removal and installation of shoring

Performance Contracting, Inc. was contacted to provide equipment for the job, as well as installation of the shoring, which was designed and completed by D.H. Charles Engineering, Inc.

“It was determined that the concrete needed to be repaired, but there was a goal to save and maintain the rest of the building,” says Mitch Meadows, branch manager for D.H. Charles Engineering. “There were many design challenges along the way, as well as phasing considerations that were critical to the success of this project.”

Since the apartment building was installed entirely on piers, Meadows explains, the only place to install structural shoring was on the beach, which was subject to tidal changes, as well as storm events. 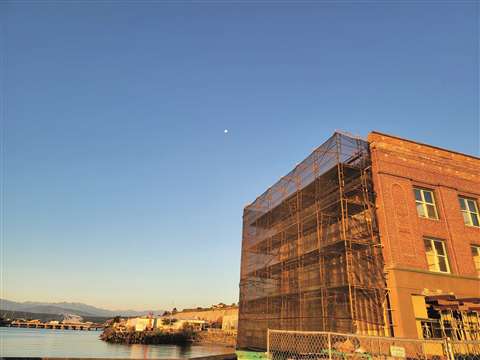 “This meant there were additional horizontal forces from waves and the potential of scouring around the shoring,” Meadows says. “To solve this, shoring bearing pads were dug into the beach and buried, and rock spalls were back filled around each bearing pad in order to dissipate wave energy and protect against potential scouring.”

The shoring was put in place to support the entire vertical load of the building while the existing piers and concrete beams were compromised and then replaced. Additionally, the modular scaffold shoring system was braced with horizontal and diagonal components, taking into consideration the additional lateral wave forces.

From design to removal of the shoring, the teams spent just under a year on the project.

Upon completion, which is estimated to be in mid-2022, the building’s reinforced back end will prevent future damage while also preserving its historical look.