East Coast Rigging and Scaffolding of Florida recently made restoration efforts possible for a 20-plus-floor condominium utilizing Layher scaffolding for the façade and to accommodate swing stages.

General contractor Starsouth Stucco put out a call for bids in February, opening the door for East Coast Rigging to prepare a proposal for the potential project. The ultimate goal was to support the replacement of brick veneers that make up the façade of the north and south building sides. 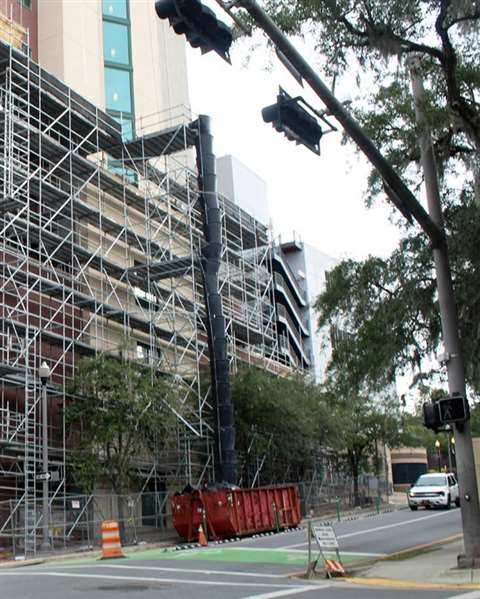 East Coast Rigging and Scaffolding constructed a 20-foot scaffolding tower on one end that bridged to meet a 50-foot tower on the other.

The high rise, the tallest in Tallahassee, had been losing facings for months in a highly trafficked district, and time was of the essence to prevent injury to pedestrians. The building’s downtown location – across the street from the state Supreme Court and library – make it a high-profile site with increased foot traffic.

The East Coast Rigging and Scaffolding team planned the scaffold design using Layher Allround for each of the two façades, scaffolds to suspend swing stages, and a transfer platform allowing vertical access. The motorized platform was designed to operate from a position 40 feet above the sidewalk to accommodate a pedestrian walkway for overhead protection and keep traffic moving safely.

Starsouth Stucco awarded East Coast Rigging and Scaffolding the bid at the end of March. With work set to begin in April, Operations Manager Al Ferreras immediately requested material from Layher’s yard in Ocala, Florida. Lighter weights and smart packing drove down the shipping costs. Reduced component weights combined with logical shipping practices prevent the need for about 1 of every 10 shipping loads, resulting in savings to clients.

Layher high-tensile steel products come in over 4,000 parts with corrosion-protected galvanized steel to make up the system. Thanks in part to the lightweight system, which reduced field hours and risk exposure, East Coast Rigging and Scaffolding completed the south build in two-weeks with a crew of about 10. They staged the façade-scaffold build from the ground level and the suspended-scaffold build from the rooftop.

Project challenges included a limited roof- top to accommodate build and equipment, making the swing stage necessary, and a significant slope on the building’s south side. To accommodate the gradient difference, East Coast Rigging and Scaffolding constructed a 20-foot scaffolding tower on one end that bridged to meet a 50-foot tower on the other. An adjustable swivel jack made the work possible. Because hurricane season runs June through November, it was additionally important that the scaffolding, though temporary, be sufficient to withstand potential weather extremes, like wind.

With the south-side scaffolding in place, Starsouth Stucco went to work on the restoration. Demolition conducted via the platforms necessitated additional trips to dispose of material, requiring extra care. The setup, however, proved sufficient to accommodate the needs of the demolition crew, stucco restorers, and painters necessary to get the job done.

After their success on the building’s south side, East Coast Rigging and Scaffolding reproduced the scaffolding build on the north-facing front. The six-month restoration effort was completed in October 2020.