Greg Beeche Logistics, LLC (GBL) was selected by Plant Construction to provide a temporary work access system for the recladding and five-story expansion of the office building at 633 Folsom Street in San Francisco, California. This project included the installation of 336 fiber-reinforced polymer (FRP) sunshades or hoods to the unitized glass curtain wall. The hoods were custom-engineered to control daylight and reduce glare, and each hood weighed approximately 300 pounds and measured a15-feet-high by six-feet-wide by two-feet-deep. GBL collaborated with Permasteelisa North America and Kreysler + Associates to design, engineer, fabricate and install a custom façade access and hoisting system to allow the installation to provide safely and productively. The GBL temporary work access system incorporated proprietary and patent-pending technology. 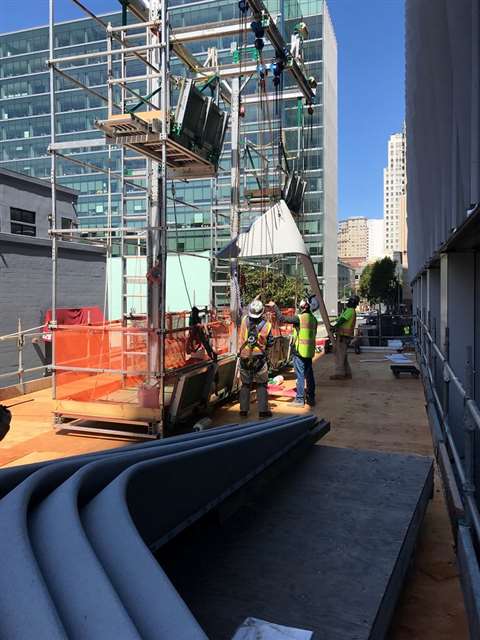 These leading edge turntables allowed the support carriage to traverse an elevation of the building and to be relocated to an adjacent elevation, all with the suspended scaffold remaining in the air. The entire cornering process took 10 to 15 minutes. This approach streamlined the post-installation scheme by eliminating the need to land the scaffold for a conventional relocation, which could have taken up to a day to complete.

With the help of GBL’S in-house designed and built electronic controlled, the support carriage autonomously traversed along the roof tracks using an underslung traction hoist and perimeter drive wire rope, which was reeved through each of the five turntables’ diverter sheaves and terminated at the extreme ends of the roof track system. Additionally, because the upper-most hoods were pre-installed to the glazing units prior to GBL mobilization, a traversing-platform-support “cathead” and counterweight “cathead” were incorporated into the carriage. The catheads were fully synchronized by means of linear positioning sensors and weight-to-reach ratios and traversed the carriage booms, moving in and out from the center of the carriage mast using rack and pinion drive. This allowed the suspended scaffold to boom out and ascend/descend outside of the installed hoods and then draw in to install the undulated hoods

The post-installation scheme was a logistical challenge. Due to the location of the building, the sidewalk bridge that provided overhead protection for pedestrians had to be re-engineered and oversized to double as a landing platform for the suspended scaffold and a staging area for the hoods. The hoods were pre-furnished with two steel slings located at the center of gravity (CG) points for listing. Using a trolley-mounted electric chain hoist hung from the scaffold’s setting monorail, the hoods were tipped up and transferred to troller-mounted steel slings hung from the scaffold’s storage monorails.

Once all four hoods were loaded onto the scaffold, workers would ascend and traverse to the floor level and elevation of the building where the hoods needed to be installed. Utilizing the scaffold’s tilt-down deck extensions, workers gained access to the vertical and horizontal hood brackets that were part of the unitized glass curtain wall mullions. While rigged from the scaffold’s setting monorail, the hoods were pressed onto these brackets and fastened with set screws.

This portion of the project was successfully completed on October.