Project planning began in the summer of 2018 when Vannoy Construction reached out to Brewer. Their client, Novant Health, required a new heating, air conditioning, and ventilation system at the Forsyth facility to service the four-wing hospital high rise. Due to limited indoor clearance, an outside housing was required. 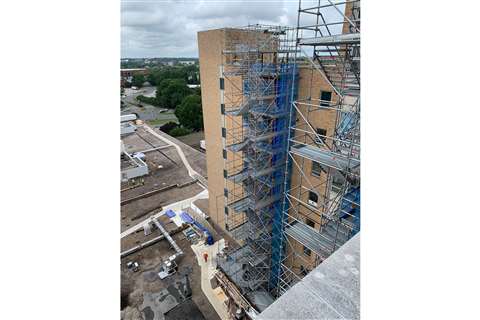 Each tower was composed of Layher Allround scaffolding and Layher Stringer 200 stair series in a 15-rise construction.

Brothers Tom and Jack Brewer, president and regional sales manager of Brewer Equipment, made an initial site visit in June 2021. Forsyth Medical Center is a single-floor at its base, with four wings extending nine additional stories. Mechanicals were planned for installation atop the roof of each wing, with shafts along the brick exterior to circulate air to individual floors.

A number of trades required access to make the HVAC system a reality. Demolishers needed admittance to portions of the façade to enable removal of brick sides. Steel workers required access to affix a frame, then construct and weld an air shaft. Still other trades — including plumbing, electrical, fireproofing, and other construction services — needed access to the shaft interior and exterior. 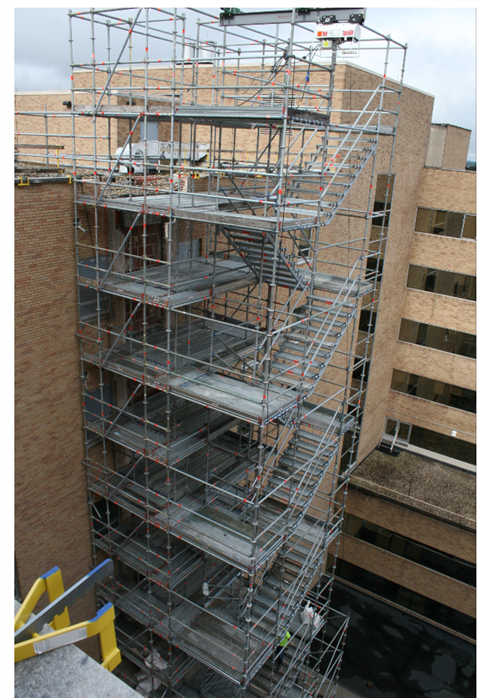 In its initial orientation, each tower was constructed with 10 foot by 8 foot platforms every 6.5 feet along the building façade.

To meet project needs, Brewer’s design called for eight scaffolding towers – a couple for each wing – in two setups to accommodate different portions of the work.

In the initial setup, each scaffolding tower provided a platform, approximately 10 feet by 8 feet, every 6.5 feet along the building façade. Contractors would use it to break out the brick.

In phase two, interior guardrails were attached to side bays to create working decks from which to build and weld a steel frame to support the shaft. First, workers removed the masonry, then a steel contractor fabricated and attached frames to existing steel along the building facade. With the steel framework in place, center bay decking was removed to accommodate the vertical installation of piping, duct work, and other vitals. 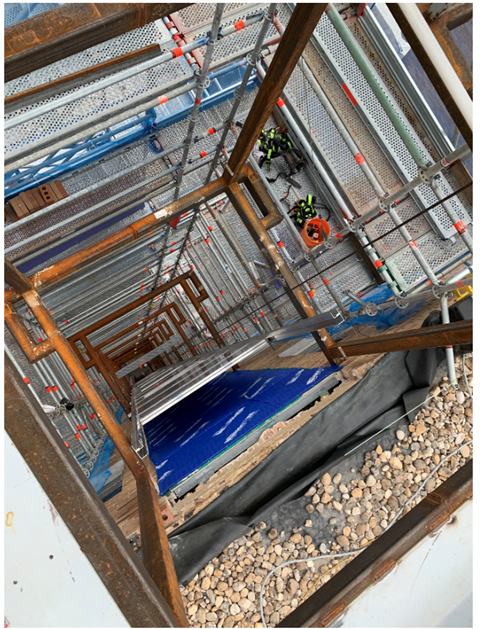 In the second tower orientation, working platforms were removed to accommodate the addition of a steel frame and air shaft.

Towers were designed using the Layher Stringer 200 series stairs, the Layher Allround, and diagonal bracing. A series of 30 Layher stair stringers made up each stair unit. Brewer has used Layher products exclusively since 2012.

For a proof of concept, Brewer set up a two-rise prototype for trades to come try out. “It was a balancing act to make sure everything was fitting within the open bay,” said Brewer. “Close enough to do the work, but not too close.”

Work on the first tower began in November of 2019. Tom Brewer oversaw installation of the first two towers with his son, Robert Brewer, taking over for the remainder of the project.

Equipment mobilization posed a unique challenge due to limited staging. Brewer approached the task utilizing a smaller, eight-person crew to transport scaffold to the roof for installation and set the base over the course of approximately two days. On day three, Brewer increased the crew – from 12 to 16 – to secure the build of each tower over an additional two days.

Two Beta Max material hoists were used to transport materials when building the towers. At the top of each tower, Brewer affixed a Gemini Scorpio hoist for contractors to move materials along the exterior. After the bay of each tower was removed, the hoist was relocated to the interior so contractors could move components for the shaft along the empty corridor and set them into place. Brewer reported that using the hoists to pass and hold material in place during installation saved considerable time and energy during construction. 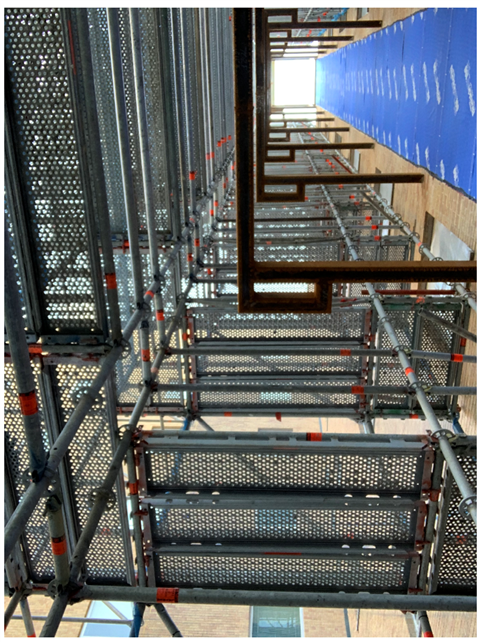 While the project originally called for erecting and dismantling the towers in successive fashion, the GC soon pivoted to a collective approach that allowed contractors to work in series, moving from one to the next as their portion of the work was done.

Project challenges included limited staging due to access. The hospital’s towers extend up from a main floor, with the upper portions accessible solely via the roof of the ground floor. 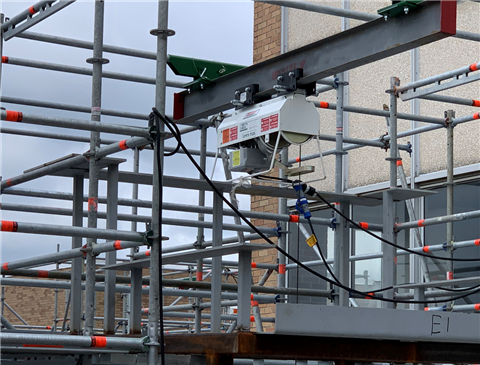 For the north side towers, each component required unloading, a transfer to carts, then wheeling through the basement into the service elevator that would take them to the roof.

Once on the roof, issues of weight-bearing posed another challenge. Forsyth medical hospital has been operating in the main building since the 1960s. To support additional weight, the general contractor had a steel structure installed to build the scaffolding into.

On the south side, getting to the roof was a challenge in itself. A six-rise staircase provided workers access to the main roof while a forklift raised equipment to the rooftop. Because the roof was particularly fragile, it couldn’t be used for staging. Components were pulled by light-duty carts over 100 yards via a small walkway with multiple makeshift ramps

Additional considerations included noise sensitivities due to high occupancy at the hospital from the COVID-19 pandemic. Scaffolding workers used two-way radios to communicate and avoid raising their voices outside patient windows. 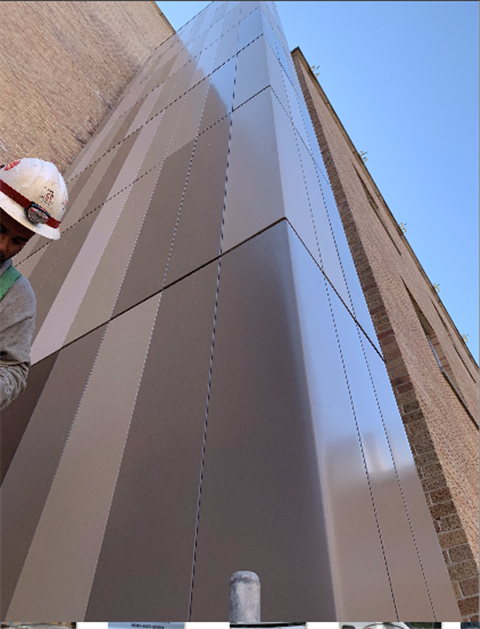 The project was completed in April of 2021.